Vdio Could Save Rdio, And Why I Switched From Spotify 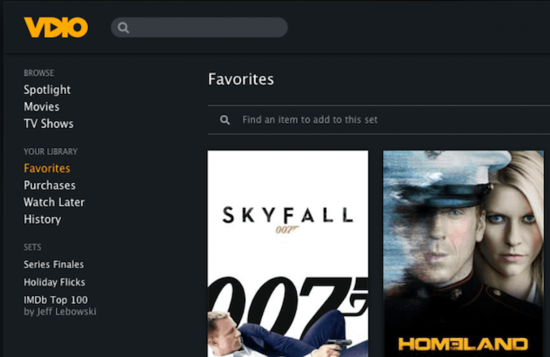 Spotify got me early-on with their free tier. They pulled in my music library, had a good collection of artists, and were the 900 pound choice for a streaming service, so I subscribed to the premium tier. I tried Rdio early on as well, but just never went all in with them. That changed today when I cancelled Spotify and signed up for Rdio. Why? Because of Rdio’s new video service, Vdio.

Granted, Vdio will be available to everyone soon enough, so switching now just for the early beta access isn’t completely necessary, but the idea of a connected music and video service is a compelling one. So compelling in fact that despite Vdio’s extremely limited offering – what amounts to an Amazon Video or iTunes like service where everything needs to be purchased or rented – it still got me to switch.

It’s early I know, but Vdio needs hulu-like video, meaning all inclusive access to recently aired TV shows. That, in combination with their top tier video rentals and purchases might be able to carve out a space in the already crowded space. I would definitely pay $20/month to have my streaming music and TV services combined under the same company, especially one focused on user experience.

Beyond access to Vdio, here’s why I switched from Spotify to become an Rdio subscriber.

The Rdio experience is a breath of fresh air. Clean, lightweight, and mostly intuitive, the web-first approach appears to have created a discipline for the designers to live within their means and come up with a user experience that benefits all (or most). Rdio’s mobile experience is also first class – so clean and beautiful – and makes Spotify’s otherwise decent app look like a giant mess.

Rdio does social as good as any music service, if not better. I’m not telling current subscribers anything new, but for those looking for a digitally organic experience “discovering” what people you know are listening to, Rdio trumps Spotify in almost every way. The limitation Rdio faces is the lack of your real world friends actually using the service. To get the full social experience you’re forced to follow those you only vaguely know or those you know of, but who don’t know you.

As a previous Spotify subscriber, my mindset was that Rdio would some day go away because they were the underdog. The idea that at some point another company would scoop up the music service to bolster their own offering. I was scared of falling in love, only to have the service disappear. I’m not longer concerned about this even if it’s still a possibility. Another sticking point that keeps people from switching is that early on, Spotify clearly had more artists, and probably still has an advantage in some regard, but since neither one has everything and are both close enough to each other, the issue is mute.

Rivals always find each other. Mac and PC, iOS and Android, Rdio and Spotify. Spotify still wins for users wanting the free experience, but once you’re ready to jump to a premium tier, I think your money’s better spent with Rdio.

So, back to the original thought, how could Vdio save Rdio? By drawing more users into the ecosystem. Streaming services desperately need a strong user base. The numbers just don’t work in small quantities, eventually forcing companies out of business. Vdio already convinced me to pull the trigger on Rdio, it might just convince you and others to do so as well. And hey, a $25 credit (for the next 60 days) for the new video service doesn’t hurt either.

Yesterday morning my piece on how Apple should open iTunes as a way to change the future of streaming was published. In the afternoon it was reported that Apple is close to buying Beats–both the headphones and streaming music service.... Continue →