A few years ago I thought that tiny earbuds, wireless and independent of each other were science-fiction. They were impossibly small and unrealistic in all their depictions.

At a certain point they were a tiny bit bigger, slightly poking out of ears, but at least they were real. The Motorola Hint Bluetooth headset, a mono device made for calls and voice commands was the first time I remember thinking, Maybe this could happen. Then there was Earin in 2014. The stereo earbuds which wirelessly connected to each other and a device.

There was no wire to be found anywhere.

Those, along with The Dash from Bragi, sparked my interest so much I decided to ask why (and how) they were able to create them now. What was the catalyst to bring independently wireless earbuds into the real world at this time?

Turns out it was mostly software — the hardware being used was from 2011, so it wasn’t some new miniaturization.

Why are AirPods so exciting? #

After using a bunch of these new wireless earbuds myself, I got frustrated that we were so close — the devices were here — but they were really hard to use.

Once you get really small earbuds, controls, pairing, and management become really hard. Just look at this list of touch gestures from The Dash. It makes sense that you’d want to have all these controls and yet, the experience is worse because it’s hard to remember how to do the different tasks, and if you mess up, the no-look interface becomes hard to “go-back,” so-to-speak. 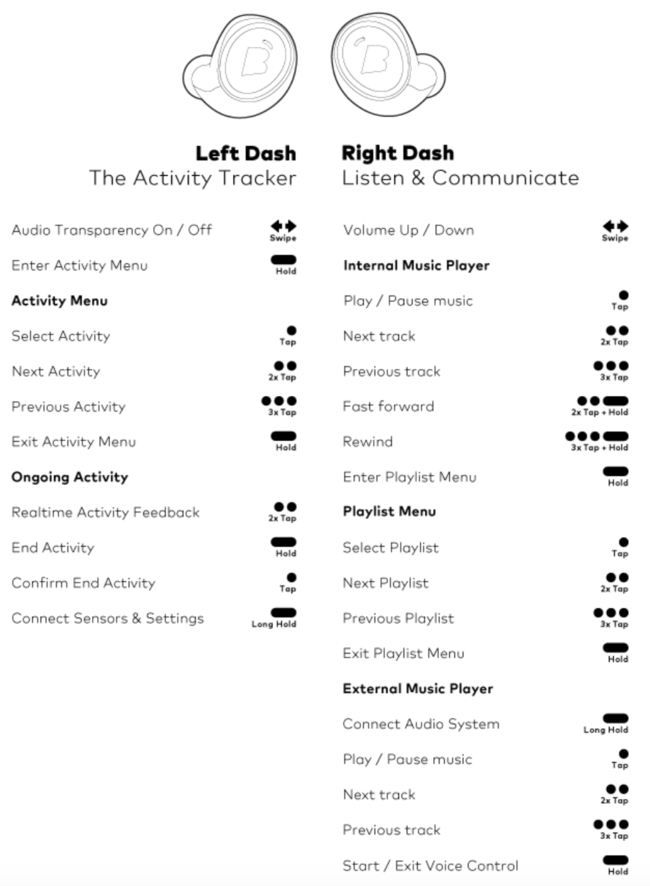 This isn’t even the full list, it wouldn’t fit in one screen grab.

It’s really easy to look at the AirPods and write them off as a pair of any wireless earbuds. I haven’t tried them yet, but I can already tell that Apple engineers have tried current options on the market and have adjusted accordingly.

This is what using wireless headphones or earbuds with touch controls is currently like: Is pause/play on the left ear, is it on the right, can both do it? Is volume up and down, is it forward and back? What was three taps again?

Because you can’t see the interface, the controls have to be few and they have to be easy. I’m not sure how it will be to double tap and ask Siri to raise or lower the volume, but I know this at least needed to be the path that they first went down. The other gesture-filled path is too bad to be the default option.

There should be no hesitation, just like using the in-line remote on wired headphones, when listening to something.

Two headphones to cover all or most situations #

The AirPods can’t cover every situation. As cool as they will likely be, I see the times you’d want to use headphones split into two situations. First is the casual, time-limited instance, and second is one more dedicated and focused.

For walking around, listening to podcasts, phone calls, and casual listening, the type of earbuds (EarPods) that come with iPhones work well. I personally like the Bose SoundSport ones because their rubber inserts and ear hook create less fatigue on my ears and hold them in place well. But EarPods do fit my ears well also.

For airplanes, trains, open offices, and use for multiple hours at a time, a good pair of noise cancelling over-the-ear headphones is a good compliment to earbuds. There are a bunch of good options from Bose, Sennheiser, B&O, Sony, and others.

The problems with Bluetooth extend beyond the wire connecting your phone to your head with earbuds. How do you listen to music in your house? I think Sonos is currently the best way and its one of the few companies articulating why an internet connected speaker is a better choice than anything else.

Bluetooth is fine, but not good and definitely not great and this video nails it.

I like Logitech’s UE Boom series (Boom 2, Roll, Megaboom) when you need a portable Bluetooth speaker, especially because they are waterproof. However, these shouldn’t really be the way you listen every day in your house.

The Earin wireless earbuds shipped in January 2016 after a lot of delays. The Dash from Bragi was shortly after that. There’s also been similar wireless earbuds from Onkyo, Samsung, Jabra, and more vendors. All the stars aligned on timing, price, and need.

Rarely do you see a when a type of technology hit the market. Most people probably won’t notice, but 2016 was the year these independently wireless earbuds became a thing. Now that Apple is here as well, it’s official.