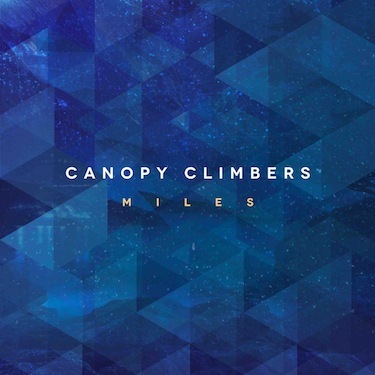 Canopy Climbers aren’t a well known band. Their previous album ‘Distances’ wasn’t talked about on many blogs and though breathtaking, didn’t win any awards. This band, however, is the reason I continue to search for new music from those currently unknown. It’s music that needs to be heard, and needs to be heard by a lot of people. On their brand new release, Canopy Climbers break free of any restraints that held them back previously. ‘Miles’ is a masterpiece capable of bridging paths to most music listeners, more importantly, making those listeners fans.

The first half of ‘Miles’ is a sweeping brush stroke filled with bright reds, yellows, and oranges. Songs soar into a sun filled sky during choruses, able to float on clouds for miles. By the album’s end, the mood is much different, but the band is careful to bring the listener down into reality with carefully placed song choices and a graceful sense of style. If you’re looking for a musical comparison, think: Mute Math meets Paper Route makes friends with Sleeping At Last.

“Project” sits between “Always” and “Stuck” in the track listing, but also musically. With humble verses that groove to a monotone voice, the chorus jumps out of the speakers and makes the song a contender for top track. It also exemplifies the band’s ability to be accessible without being predictable. The pause before the second chorus or other instrumental choices separate them from your average kids making music.

Hints of electronic and pop accessorize the faster songs while the whole album possesses a digital feel. The record is sharp, timed, and purposely calculated giving constant movement, even in the slowest of spots.

‘Miles’ is a tremendous success on every level and should be seen as such. It’s possible the record won’t find every listener in the same place it found me, but nonetheless it’s a musical milestone for the band that deserves an audience.

If I try and pull up the new Vampire Weekend song, “Ya Hey”, in Safari on a Macbook Pro without Flash installed I get the fuzzy screen letting me know I need Flash installed. If I visit the same page on an iPad though, the video plays... Continue →