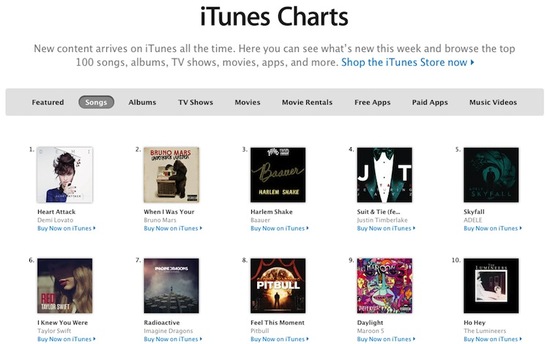 Apple should run their music business like they run their App Store. That’s to say, they should create a musician program that allows individuals, as well as companies, to sell music directly through iTunes.

Currently, independent artists need to have a third party service that will get their songs distributed through iTunes. TuneCore is one of these services, open to anyone making music and with $49/year to spend getting it in online stores. Apple entering the distribution space and allowing artists to directly sell their music through iTunes wouldn’t really change things, at first. It might seem rather ho-hum in fact. I imagine the impact to be like the Titanic hitting the iceberg. At first glance it seemed minor, the iceberg looked small enough, only to realize later what a giant hole it ripped through everything.

Why would Apple do this? It isn’t to compete with record labels, or they would have bought EMI when it went under. Potential revenue would be insignificant to their bottom line, but there’s still a few reasons it makes sense. First, I should state, I think moving towards direct artist relations is an inevitable progression, it will happen at some point. By doing so it gives them even more control over the music industry and secures dominance. Content sells devices. Amazon thinks so, Google now thinks so, and Samsung is beginning to think so.

The impact on the music world if Apple were to open an iRecords type of service is fairly obvious, it creates long term disruption. Artists would begin hiring small teams of people to conduct business and selling directly through iTunes for larger portions of the digital revenue, rather than signing to a label. Macklemore and Ryan Lewis are a prime example of how this could work. Topping the charts without signing to a major label was previously unheard of, nearly impossible, but the group shows it can be done. The other – less obvious, more crazy – implications of Apple making the move are the more interesting ones.

What about video, like television and movies? If Apple creates direct access for music, doesn’t that scare Hollywood into thinking they could do the same for video down the road? Could that be one way of persuading content providers to work with them and take the easy path rather than hold out and have film makers start going to Apple directly? The rumors are that the iTV is just looking for video content. High profile actor and director, Ed Burns has already released several films as iTunes exclusives, which he said has been a good experience and finically worthwhile.

What about the implications on streaming, does this change the streaming subscription game? Spotify’s main battle is gaining enough premium users (paying a monthly fee) to pay enough out to the labels and rights holders and make it worth their time and investment. Apple could easily work out a way to pay higher royalty rates if there were less middle-men involved and artists were being paid directly. iTunes already has the user base with the store currently selling 15k songs every minute, more than 25 billion songs since 2003.

Apple handles books for their iBook store, they handle apps for their App Store, so why not create an iRecords for music? It may not lead to the crazy theories like forcing partnerships in Hollywood, or some new streaming service, but there doesn’t appear to be a downside.

It’s easy to want to compare mobile photo apps, but if Instagram is mainly about sharing, then VSCO Cam is about editing. Instead of the two mobile photo apps competing head on for users, VSCO has focused on the product the app is... Continue →