These two speakers aren’t going to cannibalize each other at this point in time, but the realities are, anyone looking at a Google Home Max wants to know how it compares to Sonos Play:5 and vice versa. They are too similar in form, price, and function, not to be an obvious choice for someone who wants this type of speaker. 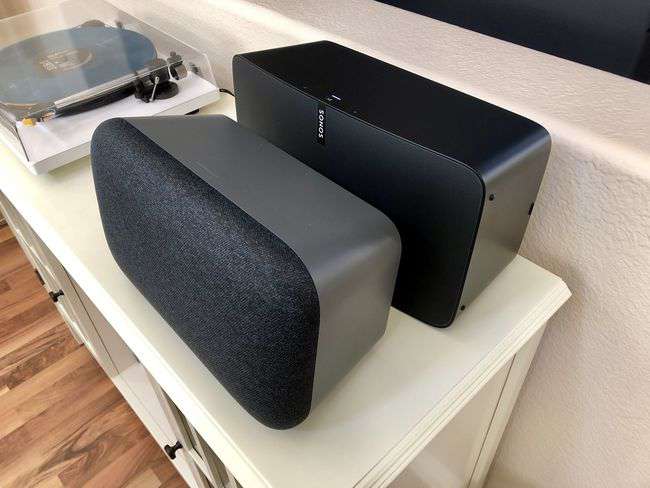 On their own, each is an awesome home stereo system replacement, capable of annoying next door neighbors. Directly compared, however, neither one is the clear cut winner on all aspects—sound and capabilities.

Both of these speakers sound great. The main differentiation for most people likely won’t be the sound, but the capabilities and how each functions as an internet connected speaker.

In broad strokes, the Google Play Max has more distinct bass and present treble out of the box. It makes an impact to play a song, slide the volume up as loud as your ears can take, and try to figure out how the bass is able to punch you from such a compact speaker.

On the other side, the Play:5 has equally impressive volume for its size. The high and lows are very much present, but aren’t as distinct with more mids and a fuller overall sound. The Play:5 has a sound which is a bit warmer and not quite as harsh when pushed beyond 40 or 50-percent volume.

The Home Max has more sound personality out of the box, and if you were to put both side to side, I think a lot of people would prefer the Home Max at first reaction. After listening to a bunch of songs back to back, however, I do think the Play:5 is the speaker with a truer and more accurate sound profile. That’s what Sonos touts, after all, a speaker which can and is used by professionals with critical ears.

It should be mentioned that all this discussion about sound has a big asterisk attached to it because both the Play:5 and the Home Max can change their EQ based on the room and their placements. Sonos uses TruePlay through your phone to calibrate a room’s shape and acoustics, while Google uses Smart Sound and uses the multiple microphones on the speaker to automatically adjust the sound for its location. 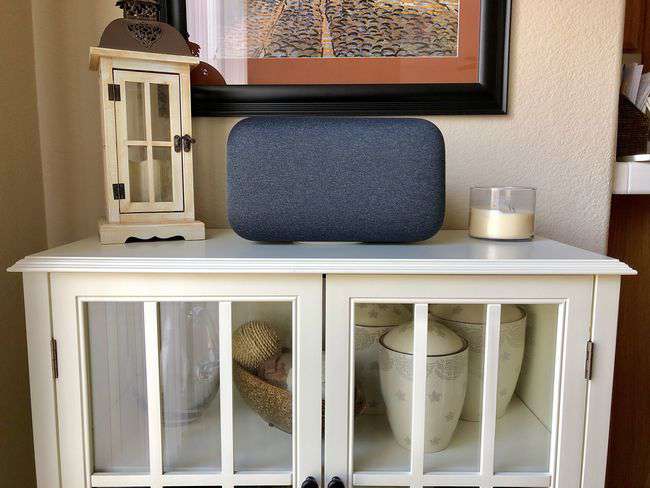 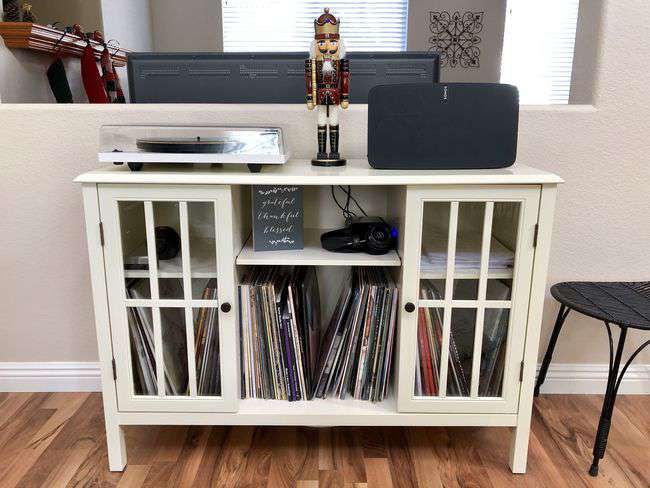 The differences in function and capabilities is pretty remarkable, despite both of these being connected speakers with nearly the same form factor.

The Play:5 uses Sonos’ app to connect all your music and audio accounts and all speaker interaction happens through the app, in a single location—give or take. Sonos does have Alexa voice controls in beta and can cast from some apps like Spotify and Google Play Music, but it still happens over Wi-Fi. While the Sonos app is an easy target for people to complain about, it is easy to understand that to control Sonos speakers, you do everything through the Sonos app.

Coming from primarily using Sonos home audio, Google’s method for interacting with its speaker feels a bit disjointed. The Home Max uses the Google Home app to set itself up, but to play music from your phone, you need to use individual apps like YouTube Music, Google Play Music, Spotify, or something else. Instead of one central music location, you’re casting your music from different apps over Wi-Fi to the speaker. (As an added benefit, the Home Max does have Bluetooth and allows for a guest mode.)

There are some oddities because the Home app is where you set up the speaker and it will show your music playing, but you can’t really start music from that app, even though you can change the volume and play/pause once music is playing—but you can’t skip songs. The Home app will also kick you over to the Assistant app for determining default music services and other speaker preferences.

The primary method for controlling music on the Home Max is, of course, meant to be voice, and that works phenomenally, when it works. Meaning, the microphones and voice control is arguably better than Amazon’s Alexa, but speaking the name of bands and music can be tough when it means you need to pronounce names like Haim, Haerts, ASTR, Hajk, Rhye, and tons of others which don’t come easily.

Still, the Home Max is really a smart voice assistant for your home, able to control your Nest products, smart lights, and dozens more, and also happens to be a really loud and good home stereo system.

The Play:5 on the other hand is the most capable connected speaker, able to play audio from major services like Apple Music, Spotify, NPR, and MLB, but also tons of smaller services from around the world. It’s a music lover’s dream. The only issue is that not having microphones and more smarts built in directly, it can feel a little limited in direct comparison to the Home Max.

These two speakers may look similar, but they function pretty differently, meaning the same people happy with one, probably wouldn’t have been satisfied with the other one. 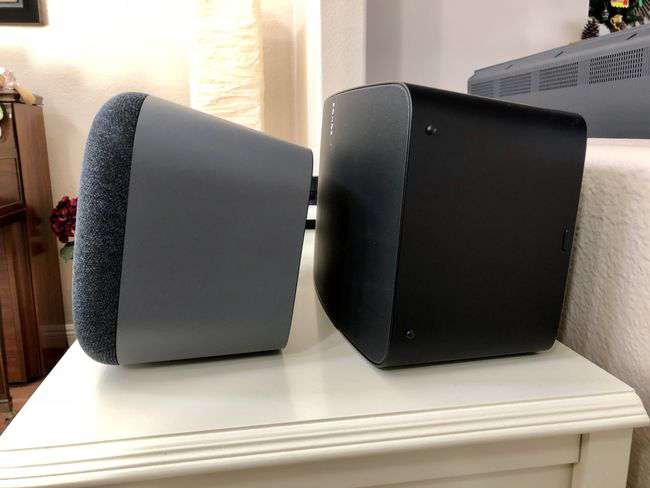 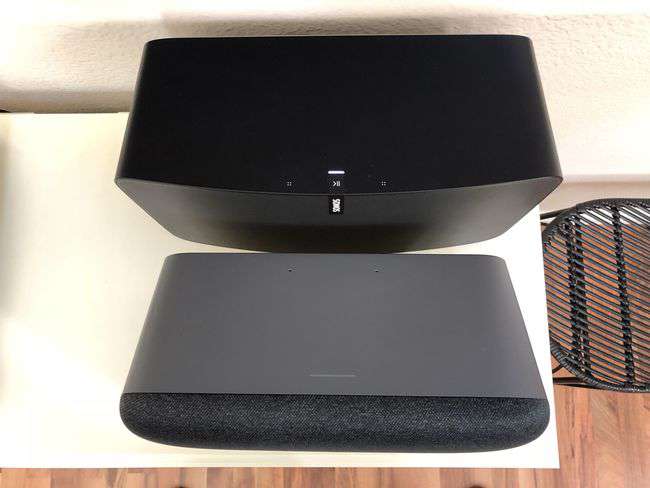 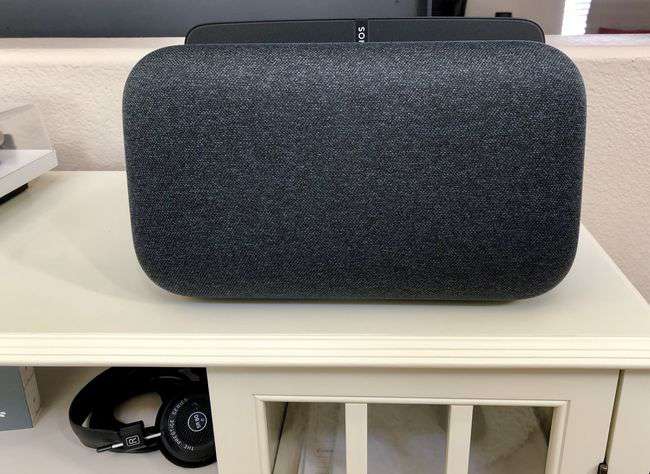 If you already have a Sonos Play:5, congratulations, you have a terrific speaker connected to the most audio choices available; there’s probably no reason you should pick up the Google Home Max—a Google Home Mini for voice assistance isn’t out of the question though.

Conversely, if you picked up a Google Home Max, fantastic, you have a really good smart speaker capable of answering your questions, controlling your smart home, and filling your home with music. You’re should be super happy with your purchase.

In the case of these two speakers, this really is case of your specific audio needs and preference. And hey, if you bought one of these and aren’t happy, return it and pick up the other one and you should be good to go.

It now seems foreign to consider writing in a full fledged word processor, only to copy it over to a CMS, then publish it online. There was a time when writing your blog post in Wordpress or another online editor just wasn’t acceptable,... Continue →