Did you get a new iPhone 6 or 6 Plus and realize it won’t fit in the dock you had been using? Or maybe you just decided it’s time to look for a new bedside option to charge the phone at night. Here’s my look at Fuz’s EverDock Duo. 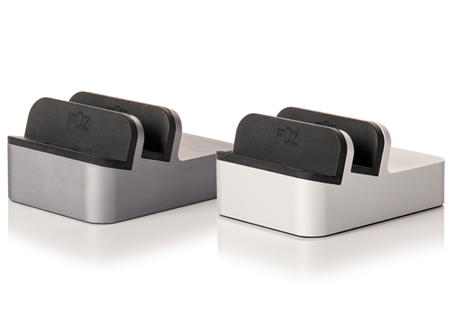 Just scouting out different options, the reason the EverDock is so appealing is its flexibility. There’s no sides which means that as iPhone grow and change shapes, the dock shouldn’t have an issue continuing to be used.

As great as some of the other premium docks might be, if you bought a 6 Plus, there’s a good chance it doesn’t fit in the small area. In addition to the open sides, the cables are also interchangeable for Android, Windows, or iOS devices.

Another aspect to consider for newer iPhones is the ability to undock them one handed. It’s been a little bit of a concern since the phones received the new lightning connector and the connection locks into place more securely.

To handle this, the EverDock uses a sticky material which keep the dock down without ruining whatever it’s stuck to. The dock is also pretty heavy duty so it has a good heft to it.

The final thing the Ever dock has going for it is its price. At $49 for the single version or $69 for the Duo version, it’s a little cheaper than some of the other similar docks out there.

In practice there are a few minor annoyances, but nothing that should keep someone from considering the EverDock. For example, the having the flexibility to use different types of cables means that they might not fit perfectly. Even with the with how the cables secure on the bottom, I had one move slightly when undocking the phone–again nothing too serious.

Overall the EverDock is a solid option over something like the Elevation Dock 2.

I Don’t Use The Same Music Service As You, Can We Still Be Friends? Part 2

Maybe it’s because I’m usually the one sharing music links, or because I use most of the services, I didn’t realize how big of a deal it was when people link to music on services you don’t use. But based on the response I received from ‘... Continue →